status:
rough draft
version: 0.0.1
Warning!
This book is in a very early stage. I don't recommend reading it with the intention of learning Neo Geo development just yet. You will likely hit pitfalls and mistakes.

Finally we begin actually coding. We are going to start small, with our only goal being to write a message to the screen.

What we will be building

Saying "Hello world" is the classic way to start out any programming endeavour. So to kick off Neo Geo programming, we will write a program that displays "Hello Neo Geo!" on the screen 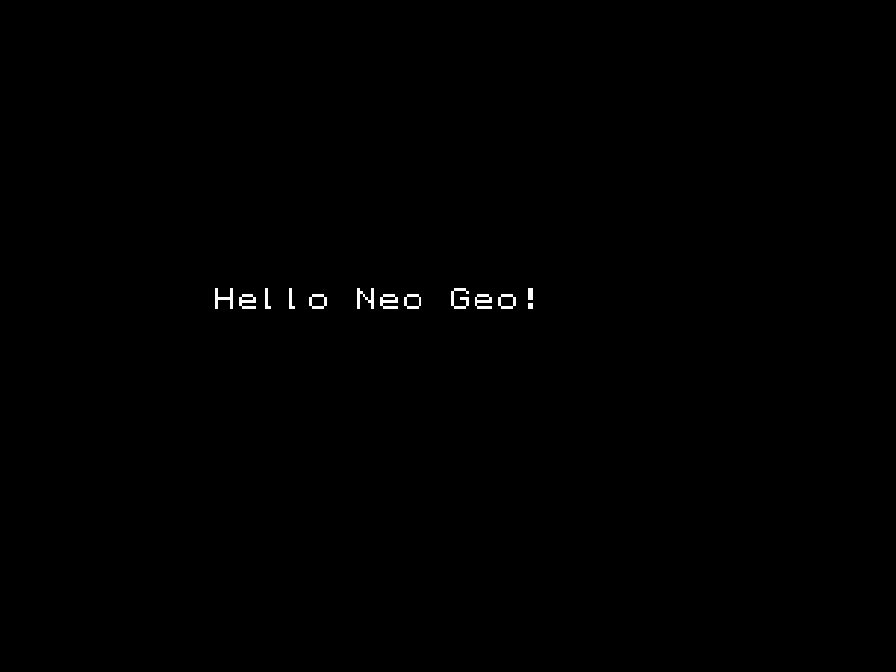 Each chapter in the book will get its own branch.

Set up your project directory

resources and src are just empty directories to start, configure.ac, Makefile.common, and Makefile.config.in you can copy in from the ngdevkit-examples project

We need a primary Makefile to drive building and running the game. We lean on ngdevkit to help us here. Create a file named Makefile in the src directory with this as its contents:

This file is nuts, especially if you're not experienced with Make. Let's ignore the details for now, we'll dive into ngdevkit's makefiles later.

The Neo Geo has no built in way to display any kind of letters or numbers. The only thing it can do is show graphic tiles on the screen. Before our app can print out a message, we need to set up some of these tiles to serve as a font.

We will be sromcrom to convert png files into tiles. First, in the resources directory, add a file named resources.json like this:

sromcrom will read this file and generate tile data accordingly. romPathRoot tells sromcrom where to write the ROM files and it is relative to the location of the resources.json file. Since we are generating an S ROM file, a single file will be written to ../src/rom/202-s1.s1. If we were also generating C ROMs for sprites, then the files ../src/rom/202-c1.c1 and ../src/rom/202-c2.c2 would also be written.

Why the "202-" prefix? 202 is the NGH number for Puzzle De Pon. We are pretending our game is Puzzle De Pon so that emulators will load it. MAME especially was written to assume only the known commercial games will ever get ran, so we need to pretend to be a commercial game to trick MAME into running our game.

The sromImages entry is where we tell sromcrom which image files to use to generate the tiles that will go into the S ROM file. We only have one this time, fixFont.png. Let's go ahead and create it. You can copy this image into your resources directory to serve as fixFont.png

As you can see it's just a small font, with each character being 8x8 pixels in size. The magenta color is how we specify transparency, there won't be any magenta displayed in the running game.

run sromcrom and check the results

We are now ready to have sromcrom generate our S ROM for us. We can do that by invoking make srom inside the src directory.

You should see a little bit of output from sromcrom:

And if you look inside src/rom, you should indeed find the s1 file. Head on over to https://city41.github.io/neospriteviewer and load this s1 file:

Excellent! Our font has been converted into tiles and is ready to go.

Why are the first 33 tiles skipped? Actually only 32 tiles are skipped, the 33rd tile is "space". The skipped tiles are due to how the Neo Geo does its "eyecatcher", the screen with the Neo Geo logo and the "MAX 330 PRO GEAR SPEC" tagline. We'll fully cover the eyecatcher later, but for now just know skipping those tiles was intentional.

In our C program, when we create a string such as "Hello Neo Geo!", it will encode those characters into ASCII. ASCII is just a mapping from numbers to characters, for example capital A is 65 in ASCII.

The first character in ASCII that we care about is space, which is number 32. If you compare the table to the fixFont.png image above, you'll see they match each other.

Sromcrom's space tile is at index 33, just off by one from ASCII. So to display text on the Neo Geo using or S ROM file, we just need to take the ASCII code and add one to it to get the corresponding tile index.

How to set tiles on the fix layer

We now know how to pick the tiles to display on the screen, but how do we actually display them? That is where the Neo Geo's Video RAM comes into play.

You can think of the Neo Geo's graphics as being declarative. We simply tell the Neo Geo "place tile 34 at this location", and the hardware will do it for us. This is done by setting values in Video RAM.

But we don't have direct access to the video RAM. Instead, the 68k's memory map has various registers that allow us to interact with video RAM.

What is a memory map? What is a register?

No worries, they are both covered in detail in the next chapter. Feel free to skip ahead and come back here if you are curious.

Here are the registers we will need to draw our tiles

And finally, we need the address of the fix map in video RAM, which is 0x7000. Thankfully, ngdevkit has named that address ADDR_FIXMAP so we don't have to remember it. The fix map is a chunk of memory storing which tiles are currently being drawn on the fix layer. It starts at the upper left corner and reads top to bottom, then left to right. The fix layer has a total size of 40 tiles wide by 32 tiles tall. But it is recommended to only place tiles in the central 38x28 portion of the layer as tiles on the edge can get cut off on some displays.

Placing a single tile in the fix layer

This is a bit simplified because it is ignoring palettes, but we'll get there in due time.

We are now finally ready to write some actual code. Create the file src/main.c and start it out with this:

We pull in the main ngdevkit header file so we can access it, you will do this in almost all source files in a Neo Geo game. We also declare main, which is the function that will get invoked when the system is ready to run our game.

Let's go ahead and start creating these functions.

Palettes are stored in regular RAM, not video RAM. Palettes start at address 0x400000, which ngdevkit has named MMAP_PALBANK1. To initialize a palette, we just need to write some colors to this address

Here we have defined a two color palette and a function which will write it into memory. Don't worry too much about why black is 0x8000 and white is 0x7FFF, we'll talk about colors later.

By the time our game is running, the system has probably already used the fix layer for the eyecatcher. We need to erase everything in the fix layer, so our fix_clear does just that:

When telling the fix layer what tile to use, you need to give it both a tile index and a palette index. This is done by taking both values and combining them into one, by shifting the palette's index up to bits 12 through 15 of the 16 bit value

In our case we are using the palette at index 0, so we don't actually need to do this, as the top bits will default to zero. You will later see that combining various chunks of data into one 16 bit word is very common on the Neo.

Then we set REG_VRAMADDR to the fix map's address. Remember, REG_VRAMADDR is the register that we use to tell the Neo Geo where in video RAM we want to read or write values.

In video RAM, all writes are done in 16 bit words. You can never write a single byte to video RAM. Whenever you send a value, it will always be 16 bits. Also whenever you set REG_VRAMMOD to 1, it means "bump the address by one word".

But why are we setting the tile index to 0xFF? For reasons we'll get to later in the book, the tile at 0xFF in an S ROM is assumed to be blank. This is true in our S ROM too (you can see it in the screenshot of the tile viewer above). Since 0xFF should be blank, it is a good candidate for clearing out the fix layer.

The tile at 0xFF should be blank but nothing enforces that. If your S ROM has some graphics in this tile, you'll likely see that tile dumped all over the place during the eyecatcher and such.

First we tell the Neo Geo we want to change the fix map by setting REG_VRAMADDR to a location within the fix map. That location is the start of the map (ADDR_FIXMAP), plus how ever much we need to move within the map to arrive at our desired (x,y) location. Since the fix layer is 32 tiles tall and column oriented, we can get the address we need by multiplying x by 32 and adding on y.

Everytime we set one tile, we want to move over by one in the x direction. We accomplish this by setting REG_VRAMMOD to 32. Since the fix map is stored in columns, by jumping ahead 32 spots, we end up in the next column over, next to where we just were.

text is a classic C char string. In main when we call fix_print(10, 14, "Hello Neo Geo !"), the compiler takes "Hello Neo Geo!" and converts it into an array of bytes, and slaps a zero on the end of it. This is identical to how strings are formed in just about any C program.

The while loop looks at each character in text one by one, and adds one to its value to arrive at the tile we need (remember our S ROM's font tiles are placed such that they are off by ASCII encoding by 1).

Putting it all together

At this point we have written the entire program. Except there is one more thing we need to do. After we have put our message on the fix layer, we have to keep our game running so that we can see the message. The 68k processor will not stop, it needs to keep running instruction as long as the console is turned on. So for this simple program, we end with an infinite loop to keep the processor busy. With that in mind, the final program is:

You can find this code here in the book's companion repo.

Compiling and running our program

Finally we can compile and run our program. Makes sure you are in the src/ directory and invoke make. This will compile the C code and do all the other needed steps to build out an entire Neo Geo ROM of our program. If you get any errors, see what the error says and see if you can figure out what you did wrong. If you get stuck, you can use the companion repo as a reference.

Finally, invoke make gngeo to see your game running in the emulator.